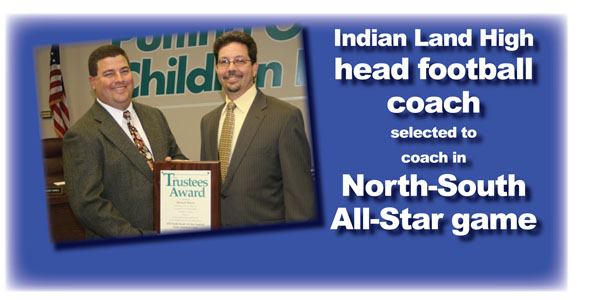 Indian Land High School head football coach Michael Mayer has been named as an assistant coach for the 65th annual North-South All-Star Football Game on Dec. 14 in Myrtle Beach’s Doug Shaw Memorial Stadium.
Mayer, the Warriors’ head football coach and athletic director since the 2001 season, The annual prep football all-star game is played the week following the Weekend of Champions, the state championship football games, and features the top senior high school players in the state.
“It’s an honor and I look forward working with some of the top athletes and coaches from around the state,” said Mayer. “As a high school football coach in South Carolina, it is your goal to be selected for this game.”
As head football coach and athletic director at Indian Land High, Mayer has
–      has produced five winning seasons, including an 11-2 mark in 2005 and an overall record of 56-73 and
•     been named
–      the S.C. Athletic Administrators Class A Athletic Director of the Year in 2005-2006
–      region athletic director four times
–      The Lancaster News High School Football Coach of the Year four times.
–      the Founders Federal Tri-County Coach of the Year for the 2010 prep football season.
–      A Carolinas Panthers Football Coach of the Week in 2005.
Mayer is the first Indian Land High School coach to serve in the game since former Warriors’ assistant Bob LeRoy served as a North assistant in the 2007 season.
The last Warriors’ last player in the game was former IL star Rondreas Truesdale in the 2011.