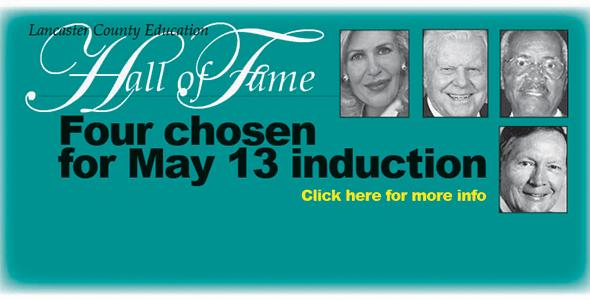 Four educators chosen for induction
into Education Hall of Fame May 13
One was a gifted band director whose bands and orchestras were known for excellence across the state and region.
One was a caring principal whose work as a science teacher, guidance counselor and principal was characterized by his fairness and by his love for his students.
One was a beloved teacher whose leadership as an assistant superintendent helped Flat Creek, Heath Springs, Hillside and Kershaw students come together to form Andrew Jackson schools.
One spent nine years in the classroom before becoming a talented district administrator who helped lead programs for elementary-age students as well as special needs and gifted and talented students.
And all four will be inducted into the Lancaster County Education Hall of Fame May 13.
“These four educators had a tremendous impact on the lives of so many students, an impact that continues to be a positive influence on our community and its citizens,” superintendent Gene Moore said.
“Our county has been blessed with so many gifted educators, and we’re pleased these four individuals have been selected to represent the thousands of talented teachers and administrators who’ve served our students so faithfully.”
The four educators, along with the district’s retiring employees, will be recognized during a luncheon in the Lancaster Golf Course Fairway Room at 11:30 a.m. The luncheon is part of the district’s annual Celebration of Excellence program, which recognizes students and employees for their outstanding work.
The four educators are
•      former Lancaster High band director Ben Watkins – Watkins became Buford, Kershaw and Lancaster’s band director in 1948 and retired in 1979.
•      former Clinton Elementary principal Eddie Jackson – Jackson began as a science teacher at Southside Elementary in 1961 and went on to serve as an assistant principal at Barr Street High, South Junior High and North Junior High before becoming principal at Clinton Elementary. He retired in 1989.
•      former Andrew Jackson assistant superintendent Doug Barfield – Barfield began as an agriculture teacher in 1953 at Kershaw High before becoming principal at Kershaw High in 1965. He became assistant superintendent for the Andrew Jackson Area Schools in 1968 and retired in 1988.
•      former school district state and federal programs director Jackie Adams-Traynor. Adams taught elementary school nine years before moving to the district office to direct state and federal programs. She retired in 1997.
The luncheon honoring these inductees and the district’s 2014 retirees was May 13 and can be seen on LearnTV Cable 114 on Tuesdays at 12, 3, 6 & 9 a.m. & p.m.