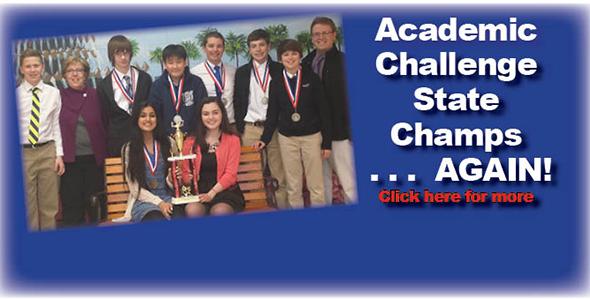 For the second consecutive year, Indian Land Middle School is the Middle School Academic Challenge State Champion and posted an undefeated season.
“The knowledge these students have and their ability to stay cool in competition and buzz in answers are really impressive,” superintendent Gene Moore said. “We appreciate all the hard work and hours the team members and their coaches spent to be the best in the state.”
The team won its second straight state championship with wins over Camden Middle School 44-30 in the opening match of the playoffs and Williams Middle School 40-28 in the championship match March 19 at Winthrop University.
The team also was undefeated for the second year during its regular season and in the playoffs.
The eighth grade team members are Nisha Patel and Sydney Strader (seated from left) and Josh Old, Coach Kay Sehorn, Luke Hubbard, Ju Hwan Cho, Camden Walrath, Wil Watkins, Patrick Shaheen and Coach Joseph Kincaid (standing from left).
Sehorn has coached the team for eight years, and Kincaid is in his first year as coach.
“Our team members worked extremely hard to achieve their goal to win the championship again,” Sehorn said, “The competition was fierce, and the Warriors had to battle from behind to tie and then eventually win the four-round match. We’re very proud of all the team’s members.”
The team also beat Williams Middle School last year to win last year’s State Championship.