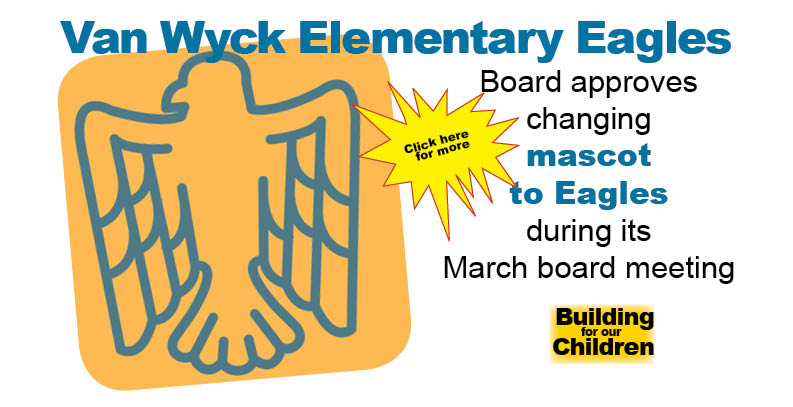 Eagles is now the mascot for Van Wyck Elementary – a change unanimously approved by the school board during its March meeting after the district received feedback from the Catawba Indian Nation and affiliated groups.

The groups shared that the “Braves” as the mascot approved by the board in February did not align with the district’s intent to support Native American culture and its history in the Van Wyck area.

“After we talked with with the Catawba Indian Nation and met with Chief Bill Harris, we realized our effort to honor and pay tribute to the Catawbas would actually do the opposite,” superintendent Jonathan Phipps said. “Chief Harris shared that recent research suggests Native American mascots are potentially offensive, perpetuate racial stereotypes and are widely found to be objectionable in Native American communities.”

Based on this new information and the district’s commitment to build bridges and establish ongoing collaboration with all groups associated with the school community, Phipps said the district believed it was in the best interest of the school district and the community to ask the naming committee to suggest another mascot for the new school.

The naming committee revisited other choices generated from the community survey and suggested the eagle as a mascot most closely aligning with the vision and feel for the new school.

Van Wyck Elementary principal Steven Puckett, who chaired the naming committee, says the eagle is symbolic of so many admirable qualities the school hopes to establish and grow in its students – strength, courage, honesty and truthfulness.

“The eagle flies higher than any other bird, mirroring our belief for our students that they can soar and reach great heights in their lives,” Puckett said. “And the eagle is known to have extremely strong vision – 4-8 times stronger than the human eye. We want students to possess a strong vision for themselves, allowing them to ‘Take Aim at Greatness’ at the earliest age.”

The colors for the school will still be blue, gold and white.