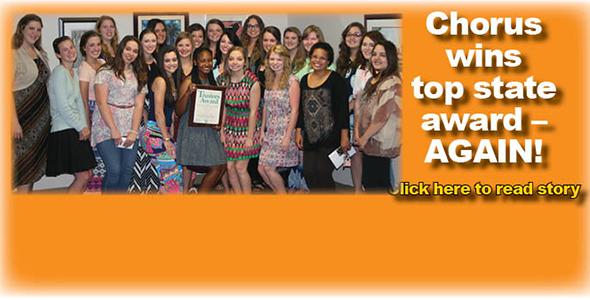 Andrew Jackson High’s Women’s Ensemble placed first for the second year in the sight reading division of the SCMEA High School State Choral Festival, scoring a 99 overall.
“Winning this title a second time is a tribute to your continued hard work,” board chair Bobby Parker said during the Trustees Award presentation during the May 19 board meeting. “We commend each of you for your dedication and for the time you spend practicing.”
The women’s ensemble was given a piece and had six minutes to prepare it without the help from the piano. The ensemble then had to perform it with accurate pitches, rhythms and dynamics.
The school’s show choir also competed in the festival and performed two prepared songs.
The show choir finished third in the state with a score of 96.5.
Both groups received straight superior ratings from all judges in both divisions – a first in Andrew Jackson history.
The show choir also performed at Festival Disney and received a superior performance rating.
Chorus teacher Lizzi Elliott directs the show choir and the ensemble.